Meet the experienced and friendly doctors and staff who make Vision Source, Dr. Rice and Dr. Galloway the leading provider of vision care products and services in Zanesville.

Dr. Galloway now resides in Gahanna with his wife and two daughters. His wife, Michelle Galloway, is a Nurse Practicioner in Gahanna and is a native of Cincinnati Ohio. Their energetic daughters are Addison and Sydney, who enjoy playing basketball, soccer, running, biking and swimming. 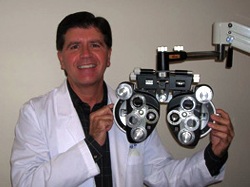 Dr. Rice was born and raised in Zanesville. Upon graduating from Zanesville High School in 1973, he attended Ohio University in Zanesville and graduated from the Ohio State University College of Optometry in 1980. Dr. Rice began his optometry practice in 1980 at 740 Princeton Avenue. In 1991, he moved to the current location at 1180 Military Road.

Dr. Rice lives in Zanesville and is married to the former Jo’D Herron. He has one grown daughter, Jamie.

You can schedule your next appointment with us online!

Let's continue the conversation over on your social network of choice.